The church was built in the 14th century and later became the favourite place of worship for the powerful Fortebracci family, who were the lords of the area.

The church's style is the one typical of the ‘mendicant orders', characterized by a sombre simplicity and by large spaces, so as to let the faithful concentrate on the sermons and follow the rites without visual distractions.

Accordingly, the church has a single nave, with a trussed roof.

The light comes in through the single-lancet windows on the side walls and from the three windows, including a central mullioned window, which open on the poligonally-shaped apse.

The latter is decorated with frescoes, sadly damaged, which were commissioned by Braccio da Montone to the Ferrarese painter Antonio Alberti, who between 1422 and 1424 painted episodes of the life of St. Francis and scenes from the Book of Apocalypse. Highly noteworthy is also the wooden choir dating from the end of the 15th century.

Behind the façade and along the left-hand side wall it is possible to observe the remains of frescoes dating from the 14th and 15th centuries, including a visage of St. John the Baptist (attributed to a Berto di Giovanni, an apprentice of Perugino), a martyrdom of St. Sebastian and a scene from the supper in the home of the Pharisee.

A stone altar is laid against that same wall. It was constructed in the 15th century by will of count Carlo Fortebracci as an ex voto to celebrate the birth of his son Bernardino, and was later decorated by the Perugian artist Bartolomeo Caporali with a fresco depicting St. Anthony of Padua between the Baptist and Archangel Gabriel holding the hand of Tobias.

Again along the left wall we find the Bancone dei Magistrati (the ‘Magistrates' Pews'), made of carved wood and inlaid with grotesque-like motifs by an anonymous 16th century artist.

The then abbot of the convent, Stefano Cambi, commissioned the Bancone to host the priors who took part in the church's functions.

Along the right-hand side wall we find another altar, probably erected thanks to the contribution of Margherita Malatesta, wife of Carlo Fortebracci. This altar used to feature a banner painted by Bartolomeo Caporali, which is held today in the town's museo comunale.

There are then other damaged votive frescoes, including a Madonna of Mercy, a Saint Catherine of Alexandria probably to be attributed to a Perugian painter from the end of the 14th century, and an episode of the birth of the Virgin Mary, probably part of a larger decorative cycle dedicated to the theme of the life of Mary.

Just before the apse, we find two niches bearing frescoes by an anonymous Umbrian painter from the 15th century, one depicting the Virgin Mary on the Throne with Child and Angels, and the other depicting Saint Anthony of Padua, Saint Bernardino of Siena and the fresco's commissioner.

As well as offering a refined example of medieval and modern Umbrian art, today San Francesco hosts a number of contemporary art and photography exhibitions, which merge beautifully with the church's environment.

Since 1995, the convent connected to the church hosts the museum of San Francesco, featuring pictures, silverware, and sacred vestments of great artistic value, coming from the church of San Francesco itself and from other churches of the surrounding area.

Amongst the works that one can admire inside the gallery, worthy of mention are Bartolomeo Caporali's gonfalone (‘banner') depicting the Madonna of Mercy, a wooden ensemble dating from the 13th century and depicting the laying of the Cross, which used to be in the church of San Gregorio Magno outside the town walls, and furthermore the Annunciation by Tommaso di Arcangelo, also known as Papacello (who belonged to the school of Luca Signorelli), which was originally made for the church of San Fedele.

There is a finally a small ethnographic section dedicated to East African culture, titled ll Tamburo Parlante (‘The Talking Drum'), curated by the anthropologist Enrico Castello.

MUSEUM OF ST. FRANCIS IN MONTONE

UNIQUE TICKET FOR UMBRIA TERRE E MUSEI
FULL PRICE: € 7
REDUCED A for groups of at least 15 people and affiliated: € 5
REDUCED B for children from 6 to 14 years old: € 2
FREE (children up to 5 years old, disabled with accompanying person, Icom members, qualified tourist guides, accredited journalists)
FREE FOR RESIDENTS: free entrance in the museum of their own city and reduced ticket for the other museums of the circuit. 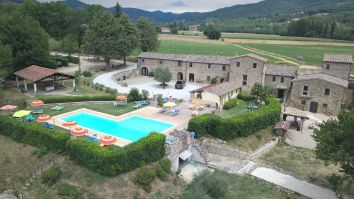 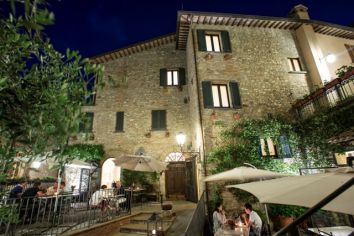 Walking paths
A journey through faith: walk the Cammino della Luce – The Path of Light
Discover these spiritual itineraries enshrined in Umbria's pristine nature
Ciclovie
Bike Lane Perugia – Trasimeno
An easy itinerary that starts from an unusual “Perugia Green” by following through the delightful countryside close to the Trasimeno Mountains, up to the Lake that suddenly turns out.