Piazza San Benedetto, the fulcrum of the regular urban layout already in the early Middle Ages, is a space cleverly articulated according to the monumental buildings that delimit it, in a stratification of functions, styles and eras from the fourteenth century Gothic to the nineteenth century renewal.


The square is overlooked by the Palazzo Comunale, the basilica of  San Benedetto, the Cathedral of Santa Maria Argentea, the Castellina and the Civic and Diocesan Museum "La Castellina".

Inside, in the Council Room, the wooden stalls of the Prior and the Consuls (16th century) are preserved, while in the Chapel of the Prior there is the rich reliquary of St. Benedict (1450), in gilded silver, in Gothic-Renaissance style The interior preserves numerous works of art. Among these, the fresco attributed to the Sparapane workshop (Francesco Sparapane) stands out. It portrays the Saints Benedict and Scholastica with the Madonna and Child in the centre. Another precious work is the crucifix by Giovanni Teutonico of 1494, a splendid example of Christus Patiens, object of recent restorations that have highlighted the potential use of the crucifix during the sacred representations.

The civic and diocesan museum "La Castellina" occupies the entire western side of Piazza San Benedetto, the heart of the historic center of Norcia.

The building, built in 1554 on a design by Jacopo Barozzi da Vignola at the behest of Pope Julius III, started as a fortified residence for the apostolic governors and was used from the beginning for the control of the peripheral territories by the State of the Church. When in 1569 the Prefecture of the mountain was instituted, the Castellina became its natural seat. Restored in the eighteenth century following the frequent earthquakes, from 1860 it became the seat of the offices of the municipality until 1967 when it became the seat of the museum.

In addition to the interesting museum that houses, the Castellina is important from an architectural point of view. Visiting the museum also means admiring its container, a powerful and compact fortress with a quadrilateral shape.

Today it houses the Civic and Diocesan Museum, the Massenzi collection and the permanent archaeological exhibition Leaving for the Afterlife.

The collection brings together works of art from the local area (sacred furnishings, frescoes, paintings on canvas or wood, polychrome wood or stone sculptures, glazed terracottas), ecclesiastical or municipal property, dating from between the twelfth and eighteenth centuries, including the thirteenth century wooden cross by Petrus Pictor, from the village of Campi, or the large altarpiece by Antonio da Faenza of the Madonna and Child with Franciscan Saints (1519), originally in the church of Santissima Annunziata. Giovanni Dalmata is responsible for the stone sculptures (Madonna and Child with Saints John the Baptist and Evangelist, 1469) from the church of San Giovanni, while Luca Della Robbia is attributed the refined group of the Annunciation in glazed terracotta from the early sixteenth century.

Donated in 2002, the Massenzi collection, one of the largest private collections in Umbria, consists mainly of bronze finds and Etruscan, Greek and, to a lesser extent, Magno-Greek vases, dating from the ninth century B.C. to the Roman era. The donation also includes a polychrome terracotta statue attributed to Jacopo della Quercia.

Since 2003, the permanent archaeological exhibition Leaving for the afterlife has been set up. It consists of recent discoveries of rich grave goods, datable between the end of the third and the first centuries B.C., in the Hellenistic necropolises of Colle dell'Annunziata, Popoli and the plan of Santa Scolastica.

Note that these structures sustained damage in the 2016 earthquake and are awaiting restoration.
Explore the surroundings
Main attractions in the vicinity 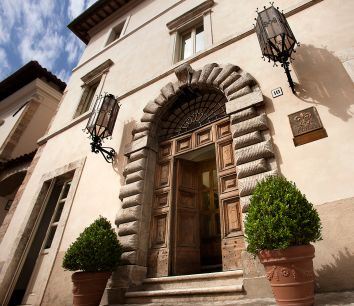