Difficulty
Medioìum
Total ascent
400 m
Distance
41 km
Go back
Add to my travel
Along the roads of the Sagrantino di Montefalco, among hills full of olive groves and vineyards regularly alternated, fairy villages and castles, in uncontaminated lands soaked of the scents of the oil and the wine of quality.

The surrounding area is also an easy place to cycle around, which is why we have chosen a spot just outside the town walls as the starting point of this particular route. In fact, you are going to leave from the large car park on the outside of the walls, and from here ride through the town and carry on in the direction of Spoleto and Trevi. At km. 1.3 turn left towards Trevi, and then at the next roundabout turn right towards Spoleto, and ride down the hill into the valley below: if, when you get to the bottom of the hill, you turn round you get a good view of the hill, covered with orderly rows of olive trees and vines, on which Montefalco stands. At the end of the descent, follow the signs to Spoleto until you come to a small village called Bruna (km. 10.5), and then turn left towards Campello sul Clitunno, Beroide and Castel San Giovanni. When you have gone past the latter two villages, continue riding along the flat SP457 as far as km. 17.5, and then bear right onto a minor road, and then left, and a kilometre further on, bear right across the narrow bridge over the River Maroggia, and ride on to the traffic lights and the underpass taking you back onto the SS3 Via Flaminia. Turn right onto the Via Flaminia, and less than a kilometre further on you come to the Fonti del Clitunno (the Clitunno Springs), a delightfully peaceful, beautiful place which you may well want to stop off at for a relaxing rest.

Now ride back along the same road until you get to the underpass once again; turn right past the underpass, and ride along the road (ZTL - limited vehicle access) that runs along the banks of the Maroggia. Follow this road for several kilometres, across four junctions, and past Pissignano Castle and the delightful town of Trevi to your right. At km. 32 turn left, cross the River Teverone and take the cycle way running along the opposite bank, until you get to the foot of the hill on which Montefalco stands. Come off the cycle way at km. 36 and bear left onto the SP444: you now have a not too steep climb (5-6% gradient) of about 5 kilometres, taking you back to the starting point.


This itinerary starts just a few steps from the walls of Montefalco, as the surroundings of the village are also characterized by excellent cycling. Known in the world for the Sagrantino, one of the most precious wines of the Umbrian territory, but also for the goodness of the oil and for the beauty of the surrounding hills, Montefalco is part of the Most Beautiful Villages of Italy and its privileged position, which allows to admire wonderful views on the central part of the region, has earned it the name of "Balcony of Umbria". It boasts a number of interesting buildings, including: the Church of St. Francis, currently a Museum, which was constructed for the Minor Friars between 1335 and 1338; the Art Gallery, with works by Francesco Melanzio, Antoniazzo Romano and the Umbrian School from the 14th to the 18th centuries; and the crypt, with archaeological findings, sculptures and items from various periods of history. The town is still enclosed by its 13th-century walls, and is dominated by the Church of St. Augustine, built together with the convent during the second half of the 13th century. Just a few kilometres from Montefalco lies Foligno, Umbria’s third largest town, boasting a series of buildings of outstanding historical and artistic importance, including: the Cathedral, the Romanesque church of Santa Maria Infraportas, the church of San Salvatore, the former church of San Domenico, and the Oratory of the Nunziatella. Other things of interest along the route include Pissignano Castle, built during the 11th and 12th centuries, and currently a residential complex. 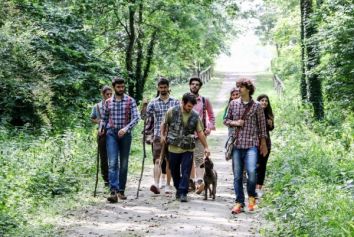