Among the three ogival portals, that are stylistically very different, the central one is splendid, decorated with spiral columns that are executed with great accuracy and decorative richness, as showed by the tendrils and the small figures on them; the portal is flanked by two niches, with a “Gabriel” and an “Annunciation” in a style recalling Jacopo della Quercia.
The interior of the church dates to the late 13th century: it has three aisles of the same height; it has cross-shaped vaults and a polygonal apse; the high altar has a Gothic style of the 14th century. The right aisle has seven chapels, the left one six chapels.
The church, containing sacred ornaments and artistical treasures, was largely plundered in 1327 – 1328 by Lodovico the Bavarian and the antipope Piero della Corvara. Among the artworks that are still preserved the following ones stand out: a Madonna with Child and two Angels, of 1432, an artwork of Masolino da Panicale; a panel in oil by A. Polinori (1618); 14th century frescoes of the Giotto school; a beautiful wooden choir of 1590, an artwork of Antonio Maffei from Gubbio.
The underlying crypt, built in 1596, hosts the relics of the five patron saints of the town (St. Fortunato, St. Callisto, St. Cassiano, St. Romana and St. Degna) as well as the sepulchre of Jacopone from Todi.
Explorez les environs
Les principales attractions dans les environs 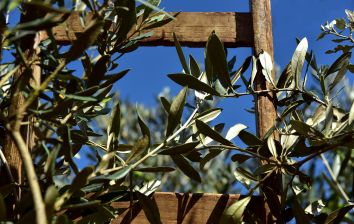