Little remains of the main facade with its pale pink and white bands. The mosaic depicting Christ enthroned between San Feliciano and Santa Messalina, the city's protectors, together with Pope Leo XIII, who commissioned the work, is a recent work, dating to 1904.
The second façade, which opens onto Piazza della Repubblica, is better-preserved and more ornate. An inscription on the outside of the portal mentions Masters Rodolfo and Binello and the year 1201.  It is characterised by the beautiful Romanesque portal decorated with classical bas-reliefs, including the Holy Roman Emperor Frederick I, Bishop Anselm, the symbols of the Evangelists and the signs of the zodiac. Over the portal is a cornice on corbels with animal protomes and a small loggia. The 2-light mullioned windows above were added in the 15th century by the Trinci family.
The elegant dome is a 16th-century addition, by Giuliano di Baccio d'Agnolo.
The single-nave interior denotes a neo-Classical restoration completed in the second half of the 19th century by Giuseppe Piermarini, to the greatly modified plans of Luigi Vanvitelli.
The canopy above the high altar is a faithful reproduction of Bernini's structure in St Peter's Basilica, Rome.
Near the transept and left aisle in the Palazzo delle Canoniche, there is the Diocesan Chapter Museum, which houses around fifty works from the Cathedral and the diocese. A visit to the Museum also includes the recently-restored Crypt of San Feliciano (7th to 9th centuries). 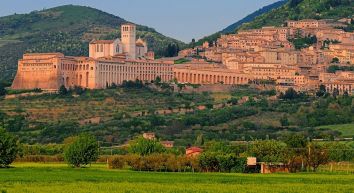