The Village of Pupaggi along the via della spina

The splendid fortified village of Pupaggi, in the municipality of Sellano, is an enchanted place that has remained unchanged over time. It developed during the 14th century, around a pre-existing medieval nucleus, consisting of a church and a dovecote tower. Because of its natural beauty, the Pupaggi area is part of a Site of Community Importance.

In 1611 the population was 125 inhabitants, which had declined to 72 in 1713; today there are fewer than 50 permanent residents. According to legend, the name of Pupaggi originated in memory of the noble and beautiful Pupa, a local young maiden. She was so beautiful that the noble feudal lords of the neighbouring areas waged bloody battles to win her. However, the lady's true love was hidden by the inhabitants inside the highest tower, so as to protect their romance forever. The bloody clashes are still recounted between myth and legend, by the old local shepherds. The dwellings spread out along a large central open space, overlooked by the public washhouse, the Church of St. Sebastian and a building composed of several parts, including the tower.

The church of St. Sebastian, built in the 13th century, is very interesting. It reveals Romanesque features in the outer side walls with regular rows of ashlars, while the facade appears to have been remodelled several times, although it partly preserves the wall material. Inside, there are many frescoes dating from the 15th and 16th centuries, among which are particularly notable the depiction of the trinity with the vultus trifrons (the triumphant head) and two allegories of concord, with the angel reconciling two knights, who embrace and lay down their arms.

The ceiling is also splendid, with a fine decoration attributed to Jacopo Zampolini and dated around 1480, depicting God in a mandorla surrounded by a host of angels, each holding a different musical instrument of the time.

Downhill from the town are the remains of the small church of the Madonna della Ginestra, which suffered serious damage in the 1997 earthquake and is now awaiting reconstruction. The fresco of the Madonna and Child inside has remained miraculously intact and is a pilgrimage destination. 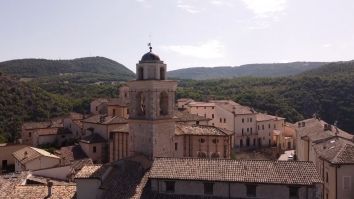