The acqueduct runs about 5 km, from Mount Pacciano to the Maggiore fountain in the historic centre of Perugia.

Built between 1254 and 1277 to supply the historic centre of Perugia with water, it fell into disuse after a long series of maintenance and structural problems at the end of the 19th century.

Together with the Maggiore fountain it is one of Perugia’s most significant monuments.

There are essentially two parts that can be visited and seen: the beginning, near Monte Pacciano and the end, near the University for Foreigners, Porta Conca area. In the historical centre, the characteristic via dell’Acquedotto takes advantage of the upper part of the monument which, with the addition of parapets, became a pedestrian path; the road has linked the Borgo Sant'Angelo neighbourhood to the historic centre of Perugia since the first half of the 19th century.

Near Mount Pacciano, there are the conservoni, ancient cisterns where water was collected, the caretaker's house and a small church.

The problem of the preservation of the entire work had already arisen during its construction, so the guardians were appointed to prevent similar thefts. Once the work was completed, near the cistern of Mount Pacciano, a small house was built with an adjacent church, where hermits settled and became, in fact, the real guardians.

Starting in the second half of the 14th century, the supervision of the fountain and the aqueduct, initially handled only by the municipality of Perugia, was occasionally contracted out to private citizens who very often did not have the important task at heart.

The main cause of the damage was the hand of man; many people plundered the aqueduct to take the lead from the pipes or even diverted its course to ensure sufficient water to irrigate their land. In 1641 it was discovered that the normal flow of water was prevented by three different cloistered convents in the city, and especially by the nuns of the convent of St. Anthony of Padua. It was decided, as a remedy, to divert the pipes from the land included in the monasteries, building the new route at the edge of the public road.

Via dell'Acquedotto is easily reachable on foot, so leave your vehicle in one of the car parks in the historic centre.

From the train station you can reach the historic centre by Minimetrò, bus or taxi.

The Monte Pacciano cisterns are located outside the historic centre in the San Marco area. 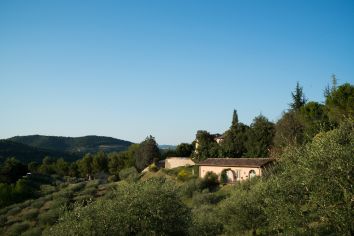 Accommodation
LA FONTE
Read more
Starting with:
€ 80
You might also be interested
Find out unique proposals to enjoy Umbria
Ciclovie
Bike Lane Perugia – Trasimeno
An easy itinerary that starts from an unusual “Perugia Green” by following through the delightful countryside close to the Trasimeno Mountains, up to the Lake that suddenly turns out.