The main architect of these works was the Lombard Master Battaglia di Pietro, who was very active in Spello in the second half of that century and also demolished the staircase ramp that gave access to the primitive palace.
It was replaced by a fountain, still existing, with the reliefs and the emblem of Julius III (1550 - 1555). In the 17th century the abbot Ferdinando Passerini partially transformed the atrium of the palace into a kind of lapidary, as it is today, that collected many of the inscriptions dating back to the Roman period and to the Middle Ages discovered in the municipal territory. The building was the seat of the Spello Municipality until 1972. The loggia gives access to the Hall of Vaults (improperly called “of the Crypt”), currently seat of the Infiorata Museum.
Openings
Explore the surroundings
Main attractions in the vicinity 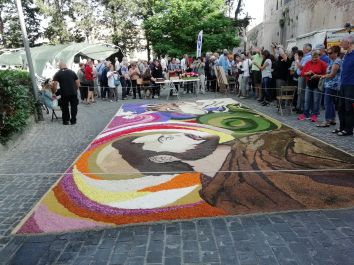