The church has undergone various changes over time: it was completely renovated in the 16th century with a rededication in 1584, then again transformed following its elevation first to Collegiate Church and then to Cathedral. In 1714, bone fragments of the two martyrs arrived in Città della Pieve from Milan, and from Naples, a small ampulla of fluid blood, traditionally attributed to the two brothers.

The original construction, built on the remains of earlier civil buildings dating back to Etruscan-Roman times, dates back to the 8th century AD; the church was then rebuilt in the 13th century, and from this period remains the underground area, possibly a crypt, part of the façade, on which we can see a series of Gothic arches, and the lower part of the bell tower with a succession of mullioned, three- and four-light windows.

In the 16th century, the church underwent a new renovation: the floor was raised and the external staircase was built; in 1574, the apse was rebuilt. Its current form, with a single nave in the shape of a Latin cross, with the addition of the large side chapels (three on each side) and the bell tower flanking the building, dates back to the 16th-17th centuries, when the church became the cathedral of the diocese. The truss roof collapsed in 1667 and was replaced with a brick vault in 1679. The church is rich in works of art from the 16th and 17th centuries. On the counter façade on either side of the organ are frescoes by Annibale Ubertis from the end of the 19th century, with a notable presence of Perugino (LINK – Il Perugino a Città della Pieve) On the first altar to the left are the Baptism of Christ, painted around 1510, and the Madonna in Glory between the Patron Saints Gervasius and Protasius, from 1514, located behind the high altar.

Among the various works are the Marriage of the Virgin, by Antonio Circignani known as 'Il Pomarancio', dating back to around 1606 (but repainted in the 18th century), as well as the Madonna del Carmine (1528), in the second altar on the left, and a Heavenly Glory.

In the apse, to the left is a painting of the Madonna Enthroned between Saints Francis, Bonaventure and a Servite, the work of Salvio Savini from the late 16th century, together with the Virgin Enthroned with Child, St Dominic and St Catherine of Siena, in the Rosary Chapel.

In the first chapel on the right is a beautiful wooden Crucifix attributed to Giovanni Teutonico (16th century); in the second chapel is a Madonna and Child among Angels and Saints by Domenico Alfani; the third chapel has frescoes by Giacinto Boccanera dating back to the early 18th century. In the presbytery is a Madonna with Saints John the Evangelist, John the Baptist, Peter the Martyr and Blessed Giacomo Villa by Giannicola di Paolo. 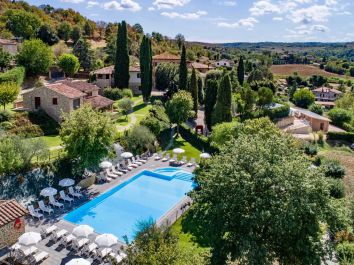