On the simple facade, which dates back to the 12th century, there is a portal architrave with a lunette and rose window above it; on the right side is the bell tower which, towards the rear of the building, becomes a belfry with a double archway. The finely decorated portal, made by sculptor Fernando Onori, is a copy of the original, which is currently held in the Metropolitan Museum in New York.

The interior, with its apse frescoed in 13th century works depicting the Virgin Mary enthroned with saints, contains fragments of marble with winged figures which are perhaps from a sarcophagus and a ciborium.

The church dates back to the 11th century. Its importance and power gradually increased right up until the beginning of the 13th century. After the massive damage caused between 1228 and 1239 by Federico II, the church was rebuilt and the original layout was completely altered: the choir area was enlarged, the facade and bell tower were built and the semicircular apse was changed to be square-shaped and became the extension to the naves.

In 1958 a major restoration project gave the church back to the community. 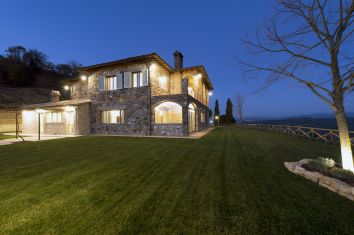 Accommodation
FATTORIA DI MONTICELLO
Read more
Starting with:
€ 81
You might also be interested
Find out unique proposals to enjoy Umbria