The fortress is located on Isola Polvese which, together with Isola Maggiore and Isola Minore, are the three islands of Lake Trasimeno.
Of the three islands, Polvese is the largest and today is characterized by its densely planted olive groves.
It was already populated in the year 1000, since the lake shores were not entirely secure.
In the census of 1282 the settlement was classified as "Villa", and so it will remain until 1438, when it was listed as "Castrum". At the end of the fourteenth century to the damage suffered by the various struggles for territorial supremacy, as the destruction of boats and fishing equipment, Polvese was almost totally abandoned.
Only in the fifteenth century the eighty inhabitants of the island decided to erect the fortress to defend them and the small group of Olivetan monks who lived there.
In 1437 because of the extreme cold and heavy snowfall, the waters of Lake Trasimeno froze.
In the seventeenth century the castle became the seat of the Governor of the lake, but even before, when the monks left because of malaria and the humid climate at the monastery of St. Anthony, the fortress began to decay.
After several changes of ownership through different important families in the nineteenth century, the order of Camaldolesi sold the castle to Count Vincenzo Pianciani of Spoleto, which created a hunting reserve with pheasants and hares.
For over half a century the family Pianciani organized hunts with Umbrian and Roman nobility.
In 1939 the new owner, Biagio Biagiotti, built new buildings and roads, planting many trees.
Since 1973 it has belonged to the Provincial Administration of Perugia, and in 1974 was declared a wildlife protection oasis.
Explore the surroundings
Main attractions in the vicinity 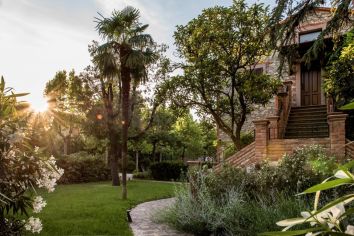