The 13th century façade, provided with an horizontal crowning, was modified different times, most recently in the first years of the1500s.

The wonderful central rose window stands out. Its original glass was replaced, during the 19th century renewal of the whole building, by the current ones by Francesco Moretti from drawings by Eliseo Fattorini and Giuseppe Francisci. It should be noted that the sculpted wooden door has the four upper panels in walnut wood produced by Antonio Bencivenni da Mercatello, who portrayed there the VIrgin, the Archangel Gabriel, St. Peter and St. Paul.

The six bottom panels, in oak, were carved by Carlo Lorenti, commissioned by the bishop Ulderico di Carpegna, as replacement of the original ones that were damaged.

The bell tower, maybe of the 1200s, stands out on the right side.

The right aisle is open by Gothic arches on octagonal columns towards a fourth aisle, divided in seven chapels, where several artworks are located: the fresco of the Nativity of a Perugia master, the window with the Baptism of Christ , copy of the Perugino executed in 1860 by Eliseo Fattorini, the panel Virgin with Child and the St. Catherine of Alexandria and Rocco, executed around the 1516 by Giannicola di Paolo.

The Gothic altar has been documented since 1343, has been modified and enriched with marble columns in 1574; above the chandelier is made up of a double eagle in silver plates, executed by Giovanni Giardini.

The Cesi Chapel is located on the left of the chancel, and its vault has been frescoed by Faenzone.

The crypt preserves three sculptures coming from the façade, depicting a Virgin with the Child, an Angel leading the Bishop and the Saint, the first two ones attributed to Giovanni Pisano, the third one to the sculptor Rubeus. 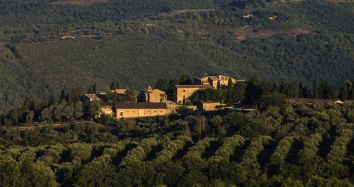 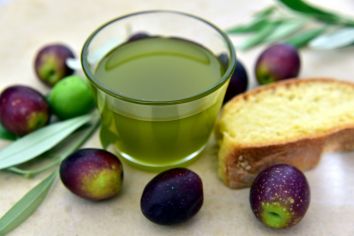 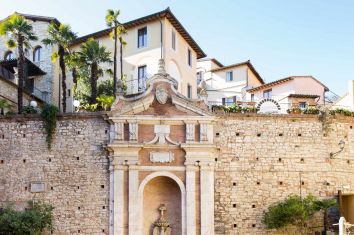 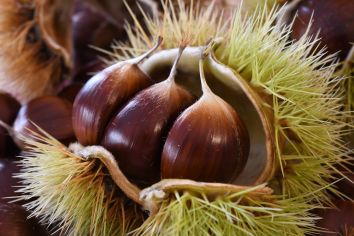