Northward, the hills, on which grow several luxuriant woods characterizing the Reserve, are extended toward the Trasimeno Lake area, while southward you can find some height greater hills, among which the Peglia Mount stands out.

The whole Reserve, incorporated into four Municipalities as San Venanzo, Orvieto, Parrano and Ficulle, has never had a strong population growth like other towns in the Region:  these places and small villages of 40k hectares have never exploited the resources of their land, preserving its great variety of flora and fauna that are living into the woods of the area, for many centuries remained almost intact. Holm oak, turkey oak, oak trees and maple trees, with many diversity of fruit trees and shrubs, they constitute a small green lung in the Green Heart of Italy.
In the district of the Peglia there are actually forty four species of wild mammal.

The Elmo wood – Melonta, a hilly area of about 1000 hectares, has got a dense vegetation mainly characterized by holm oak but you can also find other tree species, like the Turkey oak and the black hornbeam, associating to shrubby species, like the tree heat and the arbutus.
Here we have some prehistoric sites of the Peglia Mount, dating back more 700.000 years ago, and there are also some extinct volcanoes of San Venanzo, risen on the ridge of one of them, where you can watch the union of very rare rocks, only present at Quing Ling in China, at Bunyaruguru, Katwe Kykorongo in Uganda and at Mata de Corda in Brazil. The human activity was not totally absent: particularly interesting for those who want to explore the area, as well as the paths latterly opened and marked, there is the path which from the small village of Poggio Aquilone enters into the Reserve to reach Parrano and the mineral springs of the “Tane del Diavolo”. Little further north, art lovers can visit the Scarzuola, where the artist from Milan Tommaso Buzzi devised and built his visionary “Ideal City” starting from a thirteenth century convent.

The perception that you have by walking through these woods, or by exploring the “slow” lifestyle of the towns of different sizes of the area, like Ficulle, Montegiove with its castle or Orvieto, “slow city” par excellence, it consists in a unique equilibrium between man and nature. Precisely this virtuous relationship earned to this territory the status of UNESCO Biosphere Reserve, under the Programme “MAB – Man and Biosphere”. 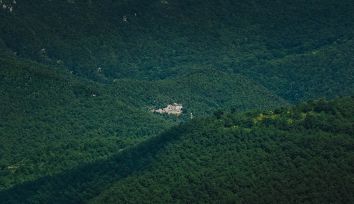 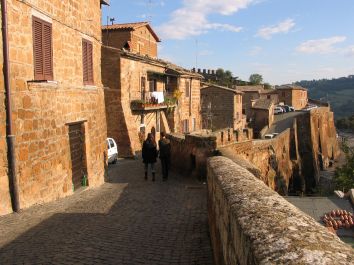