ROUTE 15 - Gubbio, the "Ceri" and the mysterious Bottaccione

Difficulty
Medium
Total ascent
1070 m
Distance
52 km
Go back
Add to my travel
Immersed in the artistic beauties of the City of the Ceri, crossing the landscape masterpieces that surround it, from the Gorges of the Bottaccione up to the Monte Cucco in an average itinerary of absolute charm.

The route, the middle section of which runs over the border into the Marche, is graded as medium given its limited length, but nevertheless requires a certain fitness due to the various climbs involved.

Starting from the car park in front of the town’s Barbetti stadium, just a short distance from the Roman amphitheatre and the town centre, take the road to your left in the direction of Scheggia. Go over the small roundabout and through the arch, following the signs to Scheggia once again, and you will find yourself at the start of the winding climb up to the Bottaccione Gorge, 4 kilometres further on. The climb is not particularly difficult, with the exception of the last kilometre taking you through the Gorge itself, a site of outstanding natural beauty and of international scientific importance, where it is claimed one of the key events leading to the extinction of the dinosaurs took place. The lengthy descent down the other side takes you to the small town of Scheggia: bear right here in the direction of Rome, and then 500 metres further on (km. 12.5), turn left towards Sassoferrato.

You then cycle down through densely wooded countryside until you reach km. 17.5; at this point, bear left off the SS360 and follow the signs to Cantiano. The road climbs slightly once again, for some three kilometres, and winds through a narrow gorge at the foot of Monte Catria, in a setting so peaceful to seem almost unreal. At km. 23 you cycle through the hamlet of Chiaserna, and a further five kilometres on you come to the quarrying village of Cantiano, where you turn left and follow the signs to Gubbio and Rome. At the next junction signposted to Rome (km. 29.5), go straight across towards S. Rocco, and follow this minor road until you reach the main road again at km. 32: be careful as you turn onto this road, as it can be very busy at times.

500 metres further on, bear left onto the SP3 Via Flaminia, in the direction of Rome, and climb up the fairly easy ascent to the Scheggia col (km. 39), which you reach after a brief downhill section of about 1 km. At Scheggia, turn right towards Gubbio, and climb up once again towards the Bottaccione Gorge: the climb to the top from this side is not too difficult, except perhaps for the final kilometre, but given that it comes at the end of the day’s ride, it should not be underestimated nevertheless. The pass is situated at km. 47, and from here on it is downhill all the way back to Gubbio.


Thanks to this itinerary of 52 kilometers you will have the possibility to discover the artistic beauties, but also the landscape beauties that surround Gubbio, famous for the race of the Ceri and one of the most beautiful and known places of Umbria. Not to be missed its historical center, that represents the masterpiece of the medieval civilization and of the two-thirds-century society, articulated in the corporations of arts and crafts. Its most important and famous buildings include: the Consuls’ Palace, which symbolises the town and currently houses Gubbio’s Art Gallery and Archaeological Museum; Palazzo Beni, Palazzo del Bargello and its famous fountain, and Palazzo del Capitano del Popolo. The twelfth-century Cathedral of Santa Maria Nuova, containing the work the “Madonna del Belvedere” by Ottaviano Nelli, is also very interesting, as are the Monastery of St. Augustine (13th century), containing frescoes by the same Nelli, and the church and monastery of St. Francis. Outside the town walls, you should find time to visit the Basilica of the town’s patron saint, St. Ubaldo, containing the body of the saint, situated up the hill overlooking the town.[Ritorno a capo del testo]Near to Scheggia, a former Roman settlement, you can find several remains of the ancient Via Flaminia. There are two areas of outstanding natural beauty not far from Gubbio, both of which are well worth a visit: Monte Cucco Regional Park, and the Bottaccione Gorge, a site of international scientific importance where it is claimed that one of the key events leading to the extinction of the dinosaurs took place. 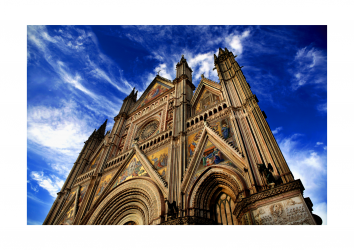 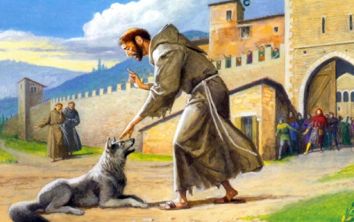