The fortress of Spoleto stands on top of Sant'Elia hill.
Once home to important figures of the time, the fortress was designed by Matteo Gattapone, a distinguished fourteenth-century architect, and is still considered a jewel of the city.
It was built by order of Cardinal Egidio Albornoz with work starting in 1359. The site plan is rectangular with six towers bearing corbels; internally it consists of two courtyards separated by a section of the building. To the north is the Cortile delle Armi, a courtyard allocated to military functions, to the south the Cortile d'onore courtyard, which had residential and representation functions.
Until the middle of the eighteenth century the fortress housed the papal governors and the most important figures of the time. In 1499 it was also home to Lucrezia Borgia, who was governor of the Duchy. The fortress suffered a steady decline during the sixteenth and seventeenth centuries. From 1764, when the governors decided to move to the centre of the city, the first modifications were made to the original structure. In 1817 it was turned into a prison and the large influx of prisoners led to the construction of an additional building structure. The fortress was used as a prison until 1983, after which, fortunately, it was the subject of a major restoration that brought it back to its former glory. The restoration has highlighted numerous pictorial works from the late fourteenth to the eighteenth century. Inside the main tower is the Camera pinta (Painted Room), frescoed between 1392 and 1416 with courteous and chivalrous scenes.
Around the Cortile d'onore courtyard there is a portico made entirely in brick, with a two-floor porch, which houses numerous frescoes from the fifteenth to sixteenth century with themes of celebration, as well as the Salone d'Onore hall. At the centre of the courtyard there is a Renaissance fountain flanked by two pillars with shelves; carved on the lintel is the coat of arms of Pope Nicholas V.
From the adjacent streets there are splendid views of Spoleto, the southern part of the Umbra Valley and Monteluco.
In addition to its historical value the fortress also has cultural merits. In fact it is the national museum of the Duchy of Spoleto, consisting of material from public collections. 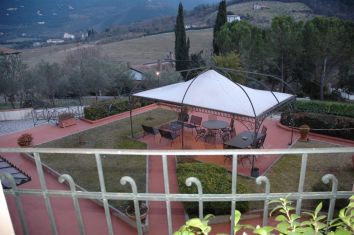