Museum of Fishing and of Lake Trasimeno

The Museum's halls illustrate the origin and evolution of Trasimeno which originated about 1.7 million years ago when, as a result of tectonic movements, a depression in the ground was created and gathered water. Over the centuries the line of the bank suffered significant changes. In the fifteenth century Braccio of Montone thus made an artificial outlet to avoid further changes. In the twentieth century further draining was made by the overexploitation of which caused a significant lowering of the lake level in recent years. The exhibit is divided into four large rooms (dawn, noon, afternoon, evening) dedicated to the fishing techniques from prehistory to the present period; interesting terracotta weights for gill nets and trawling (from the Bronze Age and the Etruscan-Roman period) or the stone lures of prehistoric times. A watercolour by Elio Pasquali shows the fishing technique called "gorro" performed with a large trawl and the other one which reproduces the processing of marsh plants. These one were used to weave nets, baskets and ropes for fishing, until a few decades ago, as well as for certain types of crafts such as woven chairseats and the covering of demijohns and flasks.

The development of lake fishing followed the spread of Christianity. From this time new fishing techniques were in fact experienced with fixed installations to meet the higher demand for fish that came from the city of Perugia, in particular during the period of Lent.
The museum displays fishing tools, has a multimedia room in the shape of boat and two large aquariums that document the type of fish that populate the lake today.

The Fishing Museum also houses the Water Library: over 200 publications and games for children and young people on the theme of water and water environments, with particular attention to flora, fauna and prehistory.

The Museum is interactive: visitors can in fact wander around the rooms with a small kit of information, discover in real time all the treasures collected here and receive a prize by answering a short quiz.

And outside there is a large square with two small boats on which children can play as fishermen.

Open from Tuesday to Sunday. 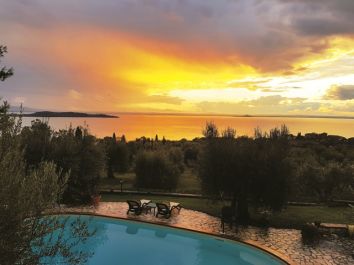 Accommodation
ISOLE E TRAMONTI
Read more
Starting with:
€ 68
You might also be interested
Find out unique proposals to enjoy Umbria