MTB 08 - Corciano and the woods of Monte Malbe

Grade
Medium
Total ascent
680 m
Distance
21,3 km
Go back
Add to my travel
The route starts from the medieval village of Corciano and for most of the way it winds through the woods of Monte Malbe, where there are beautiful views over the surrounding countryside, Perugia included

Although the trail is not very long, it is of medium difficulty because of the steep climb from Capocavallo to Monte Malbe and Colle della Trinità, over 600m high.

The start is from the carpark just outside the walls of Corciano. From here, the trail descends towards Ellera. At the next crossroads (Km1,3), it turns left towards Umbertide and continues to descend. It then goes straight ahead to km 6,4 where it turns right at the roundabout into a dirt road. Later, it returns to the sealed road and turns left at km 7,7 towards Capocavallo, and starts to climb, becoming a dirt road after about a kilometre.

The uphill road goes to the Capuccini convent (Km11,5), where an easy, enjoyable single track leads out of the woods to the start of another uphill stretch on dirt road. After a series of rather tough hills and dales, the trail arrives at Colle della Trinità, the highest point of the route. It then enters the Colle della Trinità Park before descending the sealed road back to Corciano. After the SP 172 turnoff, it is only one gentle kilometre uphill back to the starting point.


The small medieval village of Corciano (photo below) with its labyrinth of streets, alleys, towers and steps inside the high surounding walls. In the centre of the village it is worth seeing the tower of Porta S. Maria, piazza Coragino, where there is a nice 16th century well, the palazzo comunale and the palazzo del Capitano del Popolo, the parish church of S. Maria Assunta, which contains a painting of the Assunta by Perugino (1513) and the Gonfalone by Benedetto Bonfigli painted in 1472. A kilometre from Corciano, it is worth visiting Castello di Pieve del Vescovo, a square, fortified castle with an inner courtyard and four corner towers. It was built around the XIII century, but was transformed into an noble residence between 1560 and 1570. The woodlands at Monte Malbe, rising above the village of Corciano, are an excellent place to see views of Monte Tezio and Perugia. The walled villages of San Mariano, Solomeo, Chiugiana, Mantignana, Miginana e Capocavallo, all just a few kilometres from each other, have kept their original aspect and are worth a visit. 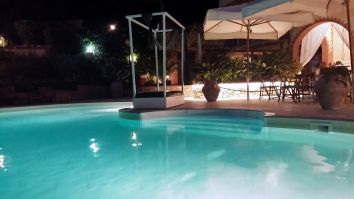