At the southern edge of Umbria, Terni is at the centre of a large plain within the catchment area of the rivers Nera and Velino


The city of Saint Valentine and the Marmore waterfall, and noted for its industry, offers unexpected evidence of all periods of history and excellent examples of reuse of derelict industrial facilities. The 1925 SIRI chemical factory site now hosts CAOS- Centro per le Arti Opificio Siri - a great cultural space that comprises the archaeological Museum and the 'Aurelio de Felice' museum of modern and contemporary arts.
The Corso del Popolo designed by architects Mario Ridolofi and Wolfgang Frankl, is representative of the great urban transformations that occurred after the second world war, and features the 'Lancia di Luce', a 30 metre high steel artwork by Arnaldo Pomodoro (1993). The centrally located piazza della Repubblica, where the forum of the Roman city of Interamna was located, features  palazzo Spada, seat of the municipality, designed by Antonio da Sangallo, who died in Terni in 1546.  Nearby is the older church of San Salvatore, of early Christian origin, expanded in the 12 th century and also featuring important 13 th century frescoes. Also of note are the Cathedral of Romanesque origin, renovated in the 17th century, the Sant'Alo church (12 th century) and the Saint Francis church, with its famous cycle of Judgment Day (1450) by Bartolomeo di Tommaso.
In the 14 th century San Pietro church the Gothic panel of the Dormitio Virginis can be admired. Of note are the stately residences that embellish the plazas, squares and historical streets of the city, among which the medieval palazzo Mazzancolli, and the 17 th-18 th century residences of Carrara, Manassei, and Gazzoli.  In the southwest area of the city you can find the 1 st century amphitheatre.
Leaving the historical town centre, beyond the Nera river, is the basilica of Saint Valentine, renovated in 1618 and dedicated to the first bishop and patron of the city.

The town's boundaries are within the Nera river park, which is ideal for all water sports. In the immediate surrounding area you can also enjoy the fascinating beauty of the Marmore waterfall, Piediluco lake and the archaeological park of Carsuale, which preserves the remains of the Roman city along the via Flaminia 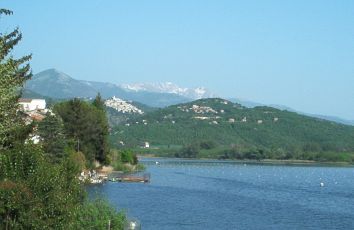