A journey among the Romanesque cathedrals and churches of Umbria

This journey will take you on a discovery tour from Todi to Assisi to see the extraordinary Romanesque architecture of buildings that radically changed the look of the older Medieval cities. It was a grand innovation which spread alongside the credos of various religious orders, including that of St. Francis.

Start in Todi: on the medieval Piazza del Popolo you will be met with a spectacle that includes the various public buildings and the Cathedral of Santa Maria Assunta. The Romanesque facade is announced by a grand staircase on top of which the building rises, set on the summit of the hill as a sign of its power, nonetheless, pre-eminence was ably conquered by the Franciscan church of San Fortunato. As you leave this town behind, look back and you'll see the two steeples rise above its skyline. Along your route, don't forget to visit the Church of San Carlo, which was originally dedicated to Sant'Ilario and is a rare example of Lombard Romanesque style, topped with a lovely bell sail-shaped tower.

As you go further north, stop off at some of the smaller towns along the way, places like Gualdo Cattaneo, perched on a hilltop between the Tiber and Umbria valleys, and see the Romanesque crypt in the Pieve di S. Antonio e Antonino. Just further on, back in the valley, lies Bevagna. Stop here and see the lovely churches of San Silvestro and of San Michele Arcangelo, set facing one another on Piazza Silvestri. They are different in style: one is very simple with a two-coloured facade, while the other is embellished with coloured mosaics, sculptures from the late Middle Ages and elements recovered from older Roman buildings. They are easy to get to if you park for a moment along the ancient walls of the town.

Get back on the road and go to Assisi, the spiritual centre of Umbria with the grand Basilica of San Francesco, the prototype for all future Franciscan churches. Stop in at the Church of Santa Maria Maggiore, the city's first cathedral, and the Bishopric, where the celebrated artist Giotto painted frescoes in the main Basilica, as well as in the Santa Croce church in Florence. From the crypt you can gain access to the Roman remains of what is known as the Home of Properzio, with mosaic floors and frescoed walls.

Once you leave the church you go uphill to enjoy the lovely panorama steeped in history and art, breathtaking and truly unique.


The Cathedral of San Rufino is located in the higher part of town, and has a splendid facade embellished by Umbrian stonemasons in the 12th century, a triumph of ideal classic harmony. Inside is the baptismal font where both St Francis and St Claire were baptized. And that is the beginning of another great story. 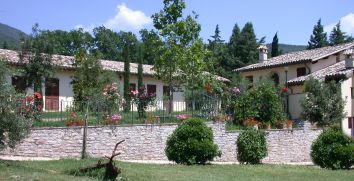 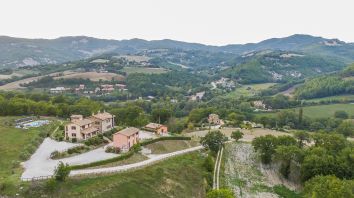