During the 1930s, this traditional activity was revived by Anita Belleschi Grifoni, a lady from Panicale who improved the techniques, revised designs and simplified the stitches. Convinced of the economic and social potentiality of this traditional activity, an exclusively women's activity, Anita Belleschi Grifoni founded a school and created its trademark, the "Ars Panicalensis".
From the beginning, 1936, the company entered into a sort of collaboration with the ENAPI —Ente Nazionale per l'Artigianato e le Piccole Industrie — and also entered into contact with many contemporary artists, who produced designs and models to reproduce in the form of laces. Thanks to Anita's initiative and to her numerous social relations, but also to the contained cost of the manufactured products, the Ars Panicalensis embroidery became célèbre among nobles and the families of the middle class and higher classes, to the point that some of its samples were also sold to the royal family of Savoia and to the princes of Torlonia.
The school, like previous and analogous experiences of the region, also had the aim of providing women with their own economic independence and personal self-realization through the production and commercialization of their handmade work. After the death of Anita Belleschi Grifoni and the closure of her school, some lace makers continued to keep this traditional technique alive. 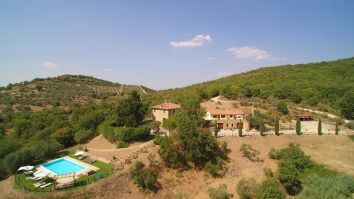