The fifteenth-century Church of St. Francis overlooks Caprera square, in the upper part of the ancient town of Nocera Umbra, and houses the Art Gallery and Museum.


Currently the Church has a single nave, with five robust, slightly ogival arches that mark the bays and a polygonal apse. The sloped roof of the nave is supported by large arches; the apse is covered with a vault with a grooved surface. The Church entrance is on the side wall, so the main facade of the Church is on the side. The sober facade is made of rectangular stone blocks with two doors. The main one is in the Gothic style with a marble architrave and an arched fanlight above; at about two-thirds up its height, the simple stone frame opens into an elegant lancet. The secondary door and Romanesque frame were probably part of the primitive church. The interior contains a series of frescoes by Matteo da Gualdo and local painters, more frescos dating back to the fourteenth to the sixteenth century are the remaining walls of the Church. There are many art works from a variety of Umbrian Churches and numerous archaeological finds. The original layout of the Church of San Francis dates back to the fourteenth century, when Pope John XXII granted the Franciscans permission to build a convent in the city. They chose to occupy and expand later a small oratory located in Piazza del Comune (as it was called at that time).

The first extension works were definitely made by the end of the century, as evidenced by a plaque placed on the left of the Gothic portal. The work probably led to a different orientation of the church (with the altar to the north) and it was expanded to about twice the size of the previous structure. Throughout the fifteenth century works inside the ecclesiastical building was carried out, thanks to  many donations by the inhabitants of Nocera Umbra.

In 1494 a further major restructuring began, including the raising of the wall towards the square and the construction of the interior arches. In 1500 the square bell tower with four windows was built to the left of the apse. The Church was the site of the Franciscan order until the Napoleonic suppression (1809) and the public concession of property belonging to the Papal State. In 1914 the Superintendent of Umbria Monuments launched a project to transform the building, which had fallen into poor condition, into a picture gallery. The beginning of the war put an end to the initiative and the Church continued its decline through the first half of the century. Finally, in the 50s the Art Gallery was built and became accessible, but by1979 it already needed to be reinforced and so was closed. The necessary work began in 1981 and in 1996 it was finally reopened, allowing the public to admire significant works of art of  Umbrian cultural heritage. 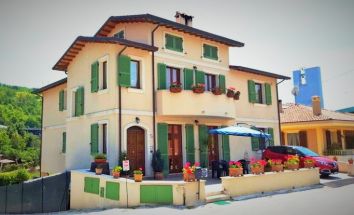