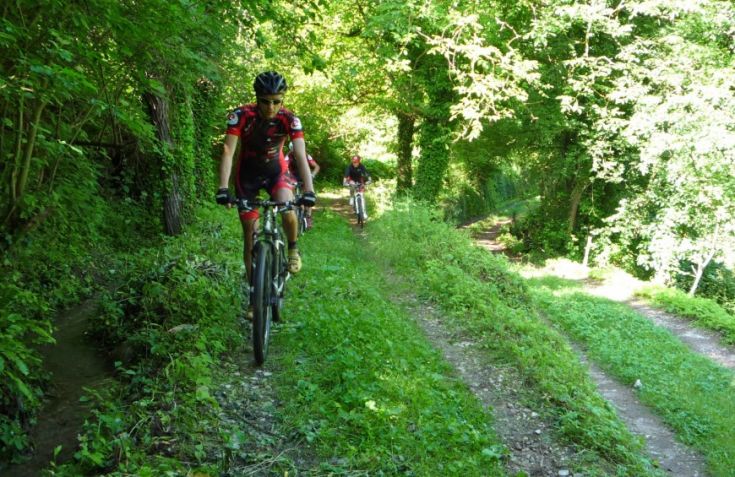 - Dinners at the restaurant of the structures, drinks not included

- Transportation, meals, tips and personal extras and anything not indicated in the fee includes

The Greenway del Nera is made up of dirt paths that run along the Nera river and make its territory usable in a slow and very low impact mode. It is nothing more than the set of different routes: the Benedictine itineraries, the Via Francigena di San Francesco and the former Spoleto Norcia railway, all connected to form a well-marked ring of about 180 km.

Our proposal will allow you to appreciate its beauty, riding an excellent e-Bike, accompanied by an expert guide.

- First day: departure and return to Arrone along the Greenway del Nera to the Marmore Falls, passing through Casteldilago. Easy, flat route with some dirt sections. Tot. 14.5 km, duration about 1 hour.

- Second day: from Arrone to Scheggino along the Nera river, passing through Ferentillo (Precetto), Macenano, Ceselli on a compact dirt road with some ups and downs. After the first stretch that extends over a wide plain, after Precetto the Greenway continues along the Valnerina, up to Scheggino. Tot. 19.7 km, duration about 2 hours.

- Third day: from Scheggino to Sant'Anatolia di Narco and return. The route climbs up into the hills, brushing past Castel San Felice and Piedipaterno, then joining the stretch that runs alongside the Nera river as far as Borgo Cerreto. It resumes along the former railway, where there are some dark tunnels (it is necessary to have lighthouses) to reach the locality Balza Tagliata following the river Corno. We return to Scheggino retracing most of the route taken on the outward journey, with small detours between Castel San Felice and Sant'Anatolia di Narco. Tot. 41.5 km, duration about 3 hours.

- Fourth day: from Scheggino to Arrone, passing through the Abbey of San Pietro in Valle. The route winds down the valley with some ups and downs. It is all compact and easily accessible dirt road. Tot. 20.5 km, duration 2 hours scarce.