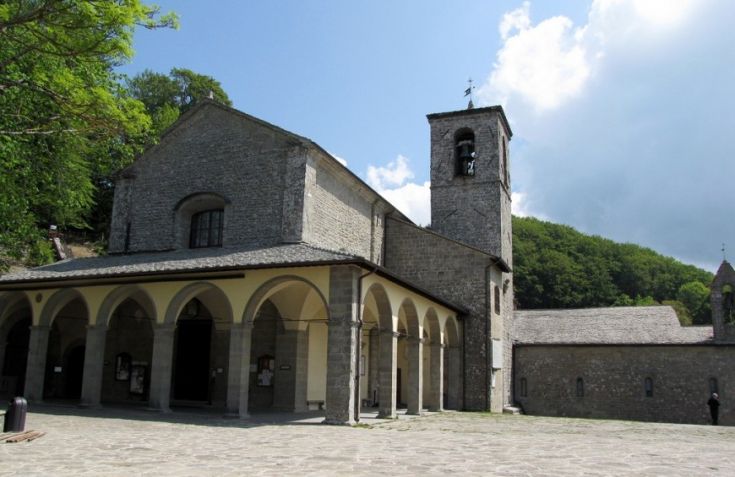 - 11 nights in Farmhouse or Hotel or B&B

- Dinners at the hotel’s restaurants or neraby

- Transport, gratuities, extras of a personal nature, what is not expressly indicated in the "price includes".

The start of this itinerary is the sanctuary of La Verna, located on the southern edge of the Casentino Forests National Park, one of the largest and most varied forest areas in Europe, rich in flora and fauna. From Casentino you can reach the Alpe della Luna chain (regional nature reserve): a vast wooded area, characterized at the highest altitudes by the predominance of beech woods, while further down there are large areas of grassland and woods of Turkey oak and hornbeam.

The itinerary then leads to the upper Tiber River Valley, a territory historically important for the passage of the Via Romea and for the disputes connected to its control. The course of the river, as it descends southwards, becomes wider and wider, flanked by two large walls of poplars. The hillsides of the valley are covered with coppice woods, interrupted by pastures and shrubs dominated by juniper.

Also in this case there are several animal species present in the area: there are traces of roe deer, brown hare, goshawk; the wolf is present in the highest wooded areas, where it can find prey in the populations of wild boars and roe deer.Last area of the itinerary that you go to cross, before reaching Assisi, is the Eugubino: predominantly mountainous area, rich in natural beauty and art treasures, crossed since pre-Roman times by the roads of communication with the Adriatic.

The wide basin of Gubbio, closed to the east by the limestone mountain and to the west by more gentle hills, is crossed by roads and ditches that testify the ancient Roman centuriation; there are still significant natural areas escaped from the anthropization.

The area towards Valfabbrica, then sloping towards Assisi, is formed by hills where oak woods, hornbeam and turkey oak alternate with shrubs, fields and pastures.