Add to my travel
Along the Via Flaminia and beyond: tour in the Umbrian Valley
Three days along the ancient Via Flaminia from the small village of Spello looking for the ancient Romans
Duration
3 Days
Meeting point
Spello
Price
€ 220 A persona a partire da
Send request 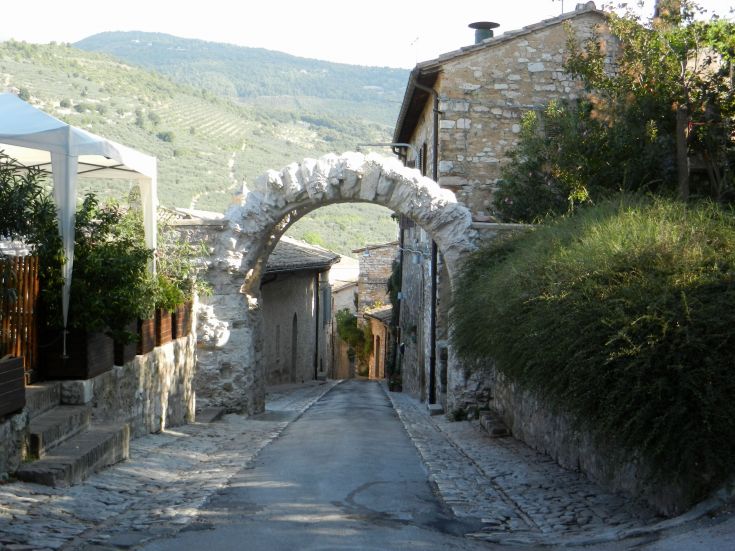 From the small village of Spello, a journey along the Via Flaminia in search of the ancient Romans: from the mosaics of the Villa Romana, to the Tower of Properzio, from Spoleto to the Clitunno Temple decanted by Pliny the Younger, up to Assisi.

Arrival in Spello, the Roman Hispellum, the Splendidissima Colonia Iulia. A page of that prosperous past is narrated by the Villa dei Mosaici di Spello, a magnificent complex of the imperial age, decorated with over 500 square meters of refined mosaics, the starting point of our itinerary. We continue to discover the Roman heritage of the city, along the walls of the Augustan age, of which there are long stretches and the original entrance, Porta Consolare. Visit of Porta Venere, flanked by the dodecagonal Towers of Properzio, and Porta dell'Arce of the pre-Augustan age, which connects the upper part of the city with Mount Subasio. Arrival at the Palazzo Comunale, where the queen of the inscriptions of Umbria is kept, the famous Rescript of Constantine, thanks to which the city obtained the privilege of the emperor to celebrate autonomous sceneries and gladiators. The Palace also houses a small jewel: the Antique Fund of the Municipal Library, with about 4,000 volumes. Visit to an olive oil mill with olive oil tasting. Continuation of an archaeological trekking along the Roman aqueduct among the olive trees of the suggestive Valle Umbra; the complete route (of 5 km) crosses the Parasacco Bridge to the village of Collepino on the slopes of the Subasio, with remains of walls, towers and a breathtaking viewpoint.Continue to Spoleto. Accommodation in 3* hotel, dinner and overnight stay.

Breakfast at the hotel and departure for the Fonti del Clitunno. Pliny the Younger wrote to a friend of his "Have you ever seen the Fonti del Clitunno? If not yet, and I do not think so, otherwise you would have talked, down to see I have seen recently and I regret having done too much late". The small lake formed by the clear waters of the river Clitunno shows incredible emerald reflections that have inspired poets over the centuries: Propertius, Pliny, Virgil, Byron and Carducci.Visit of the Tempietto del Clitunno, one of the most interesting early medieval monuments of Umbria, built on pre-existing Roman structures, is among the seven jewels of art and Lombard architecture in Italy that has recently been included in the prestigious list of World Heritage UNESCO. Free lunch. Continuation to the center of Spoleto, the ancient capital of the Longobard dukes, boasts a historical and artistic heritage of the richest in Italy, testimony of the most diverse historical eras that saw her as a protagonist.In a postcard addressed to his wife, Herman Hesse wrote about the city: "Spoleto is the most beautiful discovery I have done in Italy, there is such a wealth of almost unknown beauties, of mountains, valleys, forests of oaks, convents , waterfalls! ".Visit the Roman House, a domus of the first century AD, whose rooms still preserve, in addition to the beautiful floor mosaics, the typical pattern of patrician houses in vogue between the end of the Republican era and the beginning of the imperial era.Return to hotel, dinner and overnight stay.

Breakfast at the hotel and check out. Departure for Assisi undisputed Italian spiritual capital, lying on the slopes of Mount Subasio, between the river Topino and the Chiascio. Although today it presents itself in its urban fabric with a mentally medieval foundation, it boasts an illustrious Roman origin.

Visit the historic city center, possibility to visit the Basilica of San Francesco. Lunch at the Locanda del Cardinale, Restaurant located in the historic center of Assisi housed in an ancient Roman settlement dating back to 75 BC. of which it preserves various finds.

Visit of the olive oil mill of Spello with tasting

Ticket Entrance to the Roman House of Spoleto

Lunch at a restaurant in Assisi

Transportation, tips, city tourist tax, personal extras and anything not mentioned in "The price includes"