The small stone monument is located in vicolo del Tempietto at the corner with the central via Umberto I.

The building is the work of Vanni della Tuccia who in 1354 decorated the simple square-plan structure with anti-classical bas-reliefs depicting zoomorphic, anthropomorphic, geometrical, symbolic and esoteric motifs. The external decoration ends with an unusual ashlar. An inscription bearing the name of the author, the date of the execution and the angelic salutation runs all along the perimeter of the parallelepiped.
The small interior houses a 14th. century fresco depicting the Virgin and Child with Saints; the painting appears darkened because of the smoking oil lamps of which it is still possible today to observe the original hooks. The two windows must have been closed by wrought iron grates.
The small Temple, originally called “la maina” namely “the picture”, is the most original and best preserved building of Norcia.
There are a number of hypotheses concerning its foundation; it was maybe a small therapeutic sanctuary following the plague that devastated the city and the whole Italy during the middle of the 14th century; or alternatively it could have been built as a consequence of a particular vote expressed by the citizenship.
Explore the surroundings
Main attractions in the vicinity 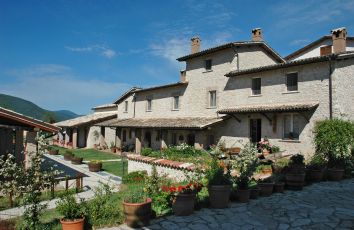 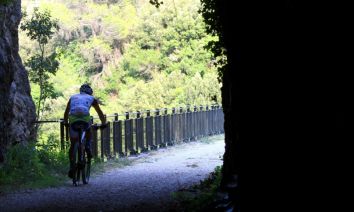 Tourist packages
Cycling from Spoleto to Marmore Falls
By bike between Spoleto and Marmore's Falls
Read more
Duration
3 Days
Starting with:
€ 258
You might also be interested
Find out unique proposals to enjoy Umbria Walking paths
St. Benedict’s Itinerary
From Norcia to Subiaco and Montecassino in the footsteps of the Father of Europe