Difficulty
Hard
Total ascent
1200 m
Distance
83,5 km
Go back
Add to my travel
Among woods, vineyards, olive groves, fields of wheat and sunflowers, in a valley path that from Spoleto arrives to the hills of Monti Martani, touching villages of great historical and artistic interest.

This route, like the Route 27, starts from the sports round in Spoleto, and winds its way across the Monti Martani hills in the very centre of Umbria. It is an undulating route that passes by a series of very interesting ancient towns and villages, such as Giano dell’Umbria and Massa Martana, and also touches on a number of areas of natural interest, and offers a series of characteristic Umbrian landscapes.

Starting from the sports ground in Spoleto, you ride off towards the Via Flaminia along the outside of the town’s military barracks, and at the roundabout turn left towards Castel Ritaldi. At the traffic lights turn right into one of the few busy roads you are going to encounter on this particular ride. 3 km. from the starting point lies San Venanzo, where you turn off the busy main road towards Protti to your right. Beyond Protti you come to the junction with the SP457: turn left here, and right on past Beroide and Castel San Giovanni to Bruna at km. 14, which marks the beginning of the short climb up to the hilltop village of Castel Ritaldi.

At the end of the ride down from Castel Ritaldi you come to a junction: go straight on here and the road soon starts to rise once again, towards Torregrosso and Colle del Marchese, through olive groves and wheat fields, with a wonderful view right across the Valle Umbra. At the end of the next descent, which brings you to Bivio Moscardini, turn left onto the SP451 and a few metres further on, turn left again towards Giano dell’Umbria, situated at km. 30 after around 5 kilometres of ascent. Carry straight on towards Monte Cerreto, along a winding road that weaves its way across the land at the foot of Monte Martano, through olive groves and dense pine forest, leading you past the fascinating castle at Castagnola. When you get to the junction with the SS316, turn left towards Massa Martana.

The road climbs up gradually to the Viepri Pass (Valico di Viepri) at km. 42, and then back down again towards Massa Martana, where you can have a rest and visit the town centre. After which, you continue to descend alongside the remains of the ancient Via Flaminia, until you get to Massa Martana Scalo, where you turn left towards Acquasparta.

When you get to Acquasparta (km. 59), follow the signs for Spoleto, and take the SR418, which marks the beginning of the most difficult climb of this particular ride, the6 km. climb through woodland leading up to the Firenzuola Pass. From the pass you then descend towards Spoleto, and ride through Baiano in order to avoid some of the traffic, and then at km. 81.4, at the entrance to Spoleto, you turn left towards San Niccolò along the narrow road running alongside the canal. Turn right at the next junction, and then at the traffic lights cross the main road and carry straight on into Via Visso, returning along the same route you took when leaving town, until you reach the sports ground once again.


Spoleto, one of the most beautiful towns in central Italy, not only boasts substantial Roman remains, but has also managed to preserve its original medieval appearance and layout. The most important monument of this, the “Town of the Two Worlds” (named after the International Arts Festival held there every year), is its Cathedral, but it also possesses a wealth of other extremely interesting buildings, including the Church of Sant’Eufemia, the Church of Saints John and Paul (Santi Giovanni e Pietro), the Abbey of San Ponziano, the Church of San Domenico, the tenth-century Church of San Paolo inter vineas, with its important series of 13th-century frescoes, and the Church of San Pietro, built in the fifth century, with its splendid Romanesque sculptured stone façade decorated with extraordinary bas-reliefs. The town is surmounted by the massive Rocca Albornoziana, work on which began in the year 1352. The area around Spoleto features the “sacred wood” of Monteluco, a dense wood of evergreen Holm Oak which is of considerable naturalistic and spiritual importance. Massa Martana, a town situated in an area where many Roman finds have been made, features a number of interesting buildings and monuments, including the Church of San Felice, built in honour of the town’s patron saint, the Church of San Sebastiano, and the 16th century Town Hall. Other places of interest include Gualdo Cattaneo, Castel Ritaldi, Giano dell’Umbria and Montecchio, situated on the slopes of the Monti Martani hills. 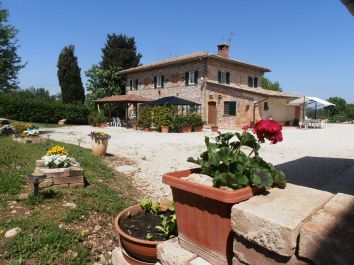 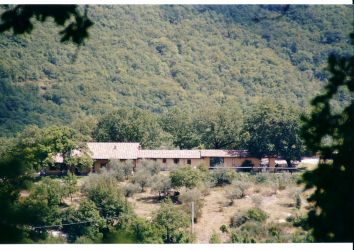