Difficulty
Hard
Total ascent
2300 m
Distance
114,5 km
Go back
Add to my travel
From Spoleto, towards the tops of the Umbro-Marchigiano Appennino, among extraordinary naturalistic foreshortenings through the Valnerina and facing four climbs of notable difficulty, more for the length than for the slopes.

This route offers some truly wonderful views, and mostly involves very quiet minor roads, but due to the said climbs (2,300 metres of total ascent) and the overall length of the route (115 km.), it requires a considerable degree of fitness. The route begins, like the previous one, from the sports ground in Spoleto: you then ride towards the Via Flaminia along the outside of the town’s military barracks, and at the roundabout turn right towards the town centre.

At the following roundabouts, follow the signs for San Giacomo, and at Madonna di Lugo (km. 3.5), when you get to the sign for the Albergo Bonicerri, turn right onto a minor road leading to the bottom of the first climb of the day. At km. 6.2, turn right towards Fabbreria, and begin the climb up to the Spina Pass (Passo della Spina): this 13 km-long climb is not particularly steep however. At the end of the descent down from the pass, carry on towards Sellano, and when you get to the junction with the SS319 (at km. 27.8), turn right towards Sellano once again. This marks the beginning of the second climb of the day, a shorter one this time, up to the Valico del Soglio (km. 31).

The descent down the other side of the pass is a long one that at a certain point goes through the town of Sellano, one of the places worse hit by the 1997 earthquake, and leads to Borgo Cerreto and the junction with the main SS209 Valnerina road. You may like to stop off for a break along the River Nera here, as the next few kilometres are going to be along isolated roads offering no further such opportunities. At the junction with the Valnerina (km. 46) turn left towards Visso, and then at the next junction turn right towards Monteleoone di Spoleto, at which point you are at the beginning of the very long climb up to the Gavelli Pass, which including the odd downhill or flat section, is all of 15 km.

The first sections are the steepest, and offer a splendid series of views to the right across the Valnerina and Cerreto di Spoleto. The following kilometres wind up in the middle of the woods, where silence reigns supreme. At km. 64.5 you come to the village of Poggiodomo, the smallest borough in Umbria, and at km. 69.5 you bear right towards Spoleto and Gavelli, where you are faced by the last few steep sections of the climb (if you turn left, on the other hand, you can visit the village of Monteleone di Spoleto).

At the end of the descent, having ridden past Sant’Anatolia di Arco, you return to the main SS209 road, and take it in the direction of Visso once again, but at km. 93.5 you bear left off the same road towards Piedipaterno. This marks the start of the fourth and final climb of the day, the one going up to Forca di Cerro. The pass is situated at km. 103, and from then on its all downhill back to Spoleto and your starting point at the town’s sports ground (km. 114.5).


As well as the centre of Spoleto and its Rocca Albornoziana, which were described in the previous route no. 26, the real attraction of this route no. 27 is the magnificence of the landscape in the Valnerina mountains, and the delightful valley itself with the cool, clear waters of the River Nera. The small hilltop town of Cerreto di Spoleto is also very beautiful: its medieval centre contains the former Monastery of San Giacomo, which currently houses the Borough’s Historical Archives and the offices of the Valnerina’s Centre for Anthropological Research and Documentation (CEDRAV - Centro per la Ricerca e la Documentazione Antropologica in Valnerina). Also of note are the Renaissance church of Santa Maria De Libera, the church of Santa Maria Annunziata, and the Castle Church. The centre of Monteleone di Spoleto is also delightful, its most interesting feature being the Etruscan Chariot, an invaluable archaeological find dating from the 6th century BC which was discovered in 1902 in a necropolis not far from the village, where it had been lain in a tumulus. This find has since been transferred to the Metropolitan Museum of New York, while a life-size copy is on display in Monteleone. Other places of interest include Poggiodomo, the smallest borough in Umbria, and above all the fortified villages of Caso, Sant’Anatolia di Narco and Vallo di Nera. 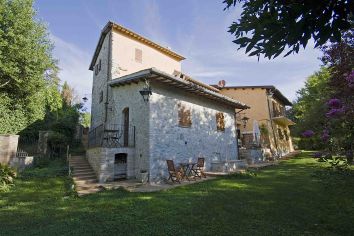 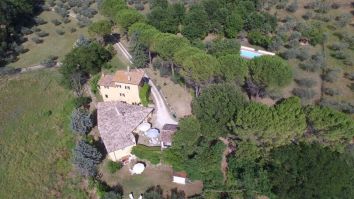 Mountain bike
MTB 16 - Spoleto and the Bosco Sacro (sacred wood) of Monteluco
A dense network of dirt roads, paths and challenging single track immersed in an extremely varied natural environment: unmissable and extraordinary beauty along an ideal itinerary for MTB and trekking lovers.
Art in Umbria
Palazzo Collicola and CAOS: contemporary art in Umbria
From the genius of Calder to the geometry of Pomodoro, Modern and contemporary art from Spoleto to Terni.