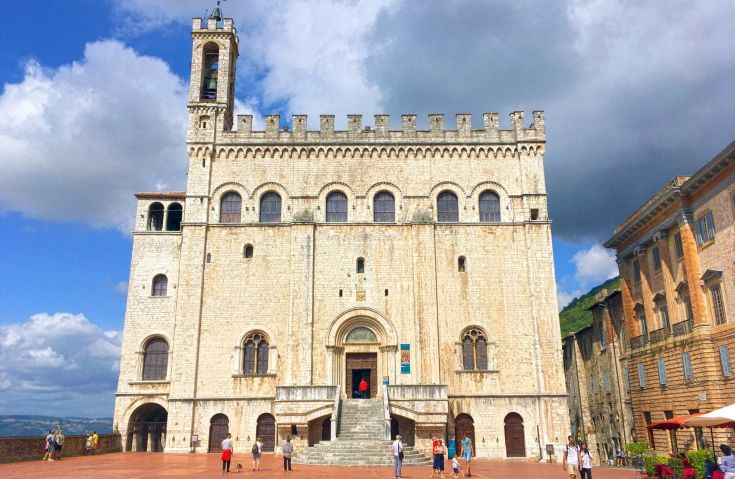 - 3 nights stay in Farmhouse or Hotel in Assisi, Città di Castello and Gubbio

- Dinners in the accomodation restaurants and packed lunches

It is the ring of the upper Val Tiberina, the eugubino and the upper Umbrian valley. The centers crossed are Città di Castello, Montone, Gubbio, Assisi, Perugia, Umbertide and many smaller towns and small villages.

Certainly spectacular is the crossing of Gubbio and Assisi which, by bicycle, are easier to discover and appreciate. Excluding short sections of the Via Tiberina with the presence of local traffic, the route runs along secondary roads and country roads where silence reigns. We also cross the centers of Perugia, Umbertide and Città di Castello that deserve a visit.

The route is challenging in the stretch from Umbertide to Gubbio and then Assisi, but is interspersed with long stretches of the plains. The crossing of the built-up area of ​​Perugia is difficult, reached by a short but steep climb. TOT. 210 Km - DISL. 3365 Mt

After a first flat stretch the road climbs to reach Montone and then, along vallonnati stretches on country roads, we arrive at the village of Pietralunga. The route continues facing a short climb and then gradually descends on secondary roads to get onto the plain of Gubbio that can be reached along a stretch of slightly busy road.

Leaving Gubbio, take the first part slightly downhill and then take a secondary road that leads to Casacastalda and passes through small hamlets of the countryside on a hilly route with some short challenging climbs. After Casacastalda the route continues on country roads with a somewhat bumpy ground but immersed in a very beautiful hilly landscape and then reach Assisi from above with a magnificent view.

The first part, mostly flat, leads us to the slopes of Perugia whose historic center is reached by facing a challenging climb. The route then descends on secondary roads until it enters the Tiberina valley and, still on country roads, reach Umbertide. The last stretch goes up towards Monte Santa Maria Tiberina and then descends towards Città di Castello.