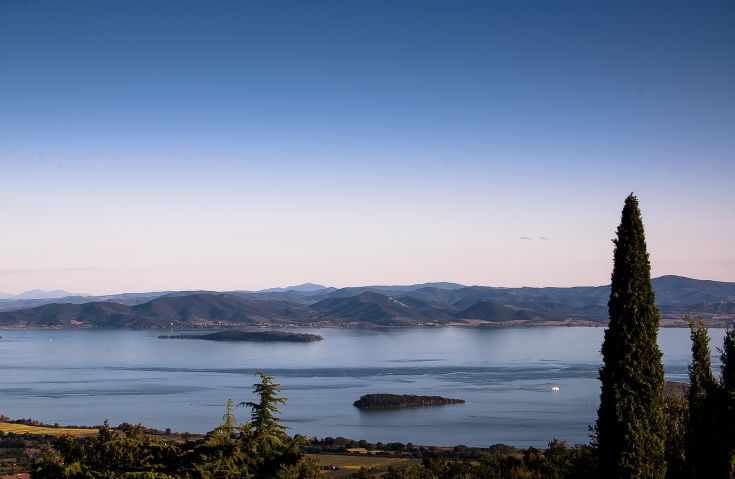 - Dinners in the structure and packed lunches

The blue in the green heart of Italy is the claim of this ring that allows you to discover two little publicized aspects of this region: its great lake, that of the Battle of Hannibal, appreciated and praised by the travelers of the Grand Tour, and a mountain characterized by the presence of lush vegetation up to the top. Another pearl of this ring is the crossing of Orvieto with direct access, from Via Maitani, to the magnificent Duomo. An unforgettable view that offers the opportunity to appreciate the wonderful works of art kept inside.

The route is partly easy and partly challenging, but divided into stages is accessible to anyone. TOT. 203 Km - Disl. 2872 Mt

From Castiglione del Lago you get to Passignano sul Trasimeno along the west bank and then the north side of the lake, reaching as far as San Feliciano, the fishing village. Then you will cross secondary roads that wind on green hills up to Marsciano to start from there the climb towards San Venanzo. The route is easy in the initial part while the hilly section has some short steep climbs.

You climb up to Monte Peglia (the highest peak of the route) on a mountain road and then face a long descent to Lake Corbara and, after passing the dike, continue facing a hilly stretch of country road up the slopes of the cliff of Orvieto. You go up towards the historic center and take via Maitani, you enter the Piazza del Duomo with a superb view.

When you leave Orvieto, you first ascend to Castel Viscardo, then descend towards Allerona, and then climb up towards Ficulle passing through the Castello de La Sala through beautiful vineyards. After Fabro scalo you proceed uphill towards Monteleone di Orvieto, then meeting Città della Pieve and descend towards Castiglione del Lago, which can be reached on a slightly busy flat road.