Essential stages for your trip on the traces of Raphael are Perugia and Città di Castello.

Are you in Umbria or are you planning a trip in the green Heart of Italy? Take note of the places where you can admire the works by the brilliant artist who was formed just in the Umbrian land and you can also admire the expositions dedicated to him, 500 years after his death.

Essential stages for your trip on the traces of Raphael are Perugia and Città di Castello.

In the Umbrian capital, where it is assumed that the young Raphael, after his father death has done apprenticeship at the Perugino’s Workshop, it lives on the only work of the many ones made by the divine painter in Perugia: the Trinity and saints. A wonderful fresco which proposes an unusual comparison between Raphael and his master and which you will find in the San Severo Chapel, of the XV century, next to the church and to the Camaldolese convent, today turned into a small museum.

Be prepared to face a good climb because the complex, hot off a conservation restoration project and a new set-up, is located in one of the highest points of the town. But we assure you that it pays off.
We tell you how events unfolded. While the great Urbinate decorated the upper part of the chapel with the figures of Trinity and of saints Mauro, Placido, Benedict abate, Romualdo, Bendict martyr and John the monk, he had the occasion to move to Rome, where he would have worked for pope Julius II. Without a second thought, the young twenty seven years old went to the Papal State leaving unfinished his fresco. It was the year 1508.
For over 12 years the fresco remained unfinished and when Raphael died in 1520, the Camaldolese called the Perugino, his old master, who completed the missing parts with figures of saints Scholastica, Jerome, John the evangelist, Gregory the Great, Boniface and Martha, and in the middle there’s a niche with a Virgin with her Son in earthenware. It is a dialogue and a confrontation between two great personalities of the art and between two different eras, which is perpetuated for over 500 years and it will leave you spellbound.

In the municipal Art Gallery of Città di Castello you can admire the second of two original works by Raphael in this region: the Gonfalone della Santissima Trinità (the Banner of the Most Holy Trinity). We are talking about the only work made by the painter from Marche region that was left in the town where the artist used to work during the late Fifteenth century and the beginning of the Sixteenth century, when he left the Perugino’s workshop with the title of magister.
This work, maybe dated 1499, is composed by a part of the Trinity with on both sides the saints Rocco and Sebastiano, while in the other part there’s the Creation of Eve from Adam’s rib and two angels.
According to sources, the banner was carried in procession by the brothers at least until 1627, when, due to wear, it was decided to separate the canvas and store them on two lateral altars of the Holy Trinity church to ensure a better preservation. From here the banner was removed in 1855 and from 1912 became part of the Art Gallery collection.
Did you know that the sweet painter right at Città di Castello and Perugia realized many other works? Among them, one of his masterpiece: the Sposalizio della Vergine (the Wedding of the Virgin), now kept in the Brera Art Gallery.
We suggest you in this regard to enter into the church of Saint Francis where the master painted this piece in 1504 then stolen in 1798 by a general of Napoleonic troops. On the altar a copy of this can be admired.

At the Civic Museum of Palazzo della Penna “Perugia commemorates Raphael. Fortune and myth of Raphael in Umbria”, from June to September 2020. Sponsored by the Municipality of Perugia and edited by Francesco Federico Mancini, a professor of history of modern art at the Perugia University, this exhibition wants to review the fortune and the myth of Raphael through several paintings, engravings, designs, ceramics and glasses painted, from Sixteenth century to Twentieth century and it proposes a process which constitutes a parallel, in terms of visual testimonies , of several literary documents and of history of criticism which they will also be object of the exhibition.

At Palazzo Baldeschi at the Course “Perugia commemorates Raphael. Raphael in Umbria and his inheritance” from April to September 2020. This exhibition organized by the Foundation CariPerugia Arte together with the Academy of Fine Arts of Perugia is developed in two parts. One of it is dedicated to the Umbrian period of Raphael, thanks to an important multimedia section with many fantastic immersive video projections and thanks to the exposition of several pieces by Raphael’s masters like: Perugino, Pinturicchio and Signorelli. The other one, strictly expositive, is dedicated to the legacy left by the artist above all academically.

Always by following the theme of Raphael celebrations, the Foundation CariPerugia Arte organizes, from April to October 2020, another exhibition  at Gubbio, in the Lodges of Tanners of the Wool entitled “From the lusterware to the stained: Raphael and the new earthenware”. This exhibition is focused on the productions of lusterware pottery and it wants to document, by arranging about one hundred and forty pieces, other materials and multimedia support, the features and the quickly shift from the lusterware production to the stained one with particular reference to the reproduction from the printing engravings of Raphael’s pieces and other painters of that time.

At the National Gallery of Umbria in Perugia, from October 9th 2020 to January 10th 2021 you will enjoy “The Fortune of the Raphael’s Pala Baglioni in Perugine copies”, a show that deepens the fortune of the “Deposition” by Raphael stolen from the church of Saint Francis al Prato at Perugia in 1608 and now kept in Rome at the Borghese Gallery.
At the municipal Art Gallery of Città di Castello, from October 10th to January 2021 will be on stage “the young Raphael at Città di Castello and his look” in which several aspects of the artistic activity linked to the first years of production by the young painter and to the impact that his lesson left in the region, they are highlighted. 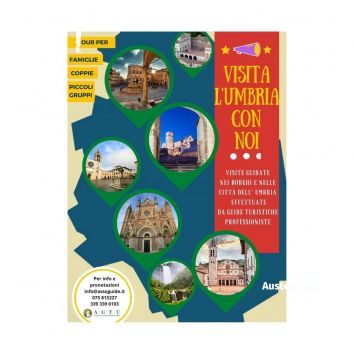 Tourist packages
With Family on the Etruscans Paths between Orvieto and Perugia
Starting from
Read more
Duration
4 Days
Starting with:
€ 550

Accommodation
MONTESALCE
Read more
Starting with:
€ 65
You might also be interested
Find out unique proposals to enjoy Umbria